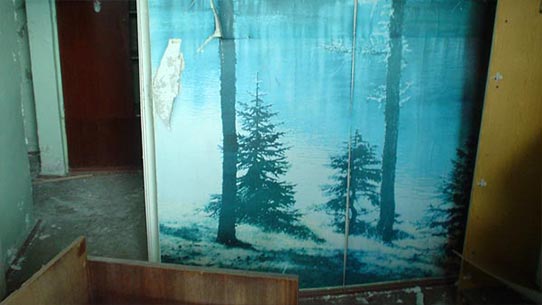 It’s hard to imagine a modern city without any human sounds, any background-noise or cars. No movement at all, only wind playing with a tree. Visiting the ghost town Prypyat is like visiting ancient Maya-temples, but now without tourists. We are standing on the rooftop of a 15-floor flat. The town looks like a concrete island, surrounded by a sea of green forest, as far as you can see.
This is a no-go-area for people, but nature is flexible and already reclaiming the city. Populations of wolves, elgs, and przewalsky horses have increased. As species they are better off then before the accident. 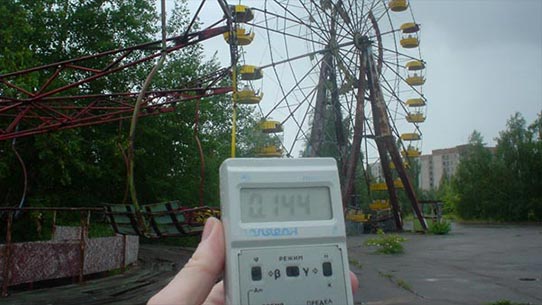 These attractions were setup but never used.

Chernobyl is sealed off by a 30 and 10 kilometer security parameter. Without special authorization you cannot enter these zones. Except for a few special places radiation is actually quiet low.
Just like in 9-11 the true hero’s of the 1986 Chernobyl-disaster were firefighters. Officially they didn’t know about the risk of radiation, but they knew. One helicopter-pilot mounted an extra steal-plate underneath his seat but it did not protect him.
Due to radiation all water within the human body turns into peroxide, destroying all body-cells from within. Most men died in terrible pain. One fireman's wife told that after her husband had died, in his bed she found some of his fingers that had fallen off. 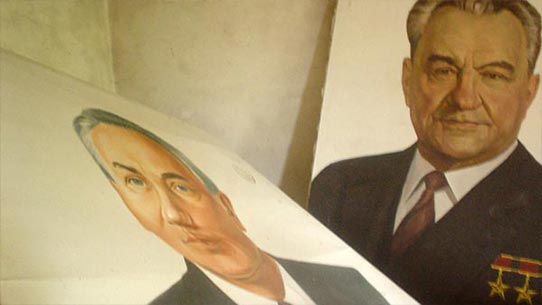 It took the communist authorities almost two days to decide for the towns evacuation, and much longer until they were forced to publicly admit that ‘some minor accident’ had occurred. The Chernobyl disaster was simply considered unnecessary to reveal openly. After the collapse of the Soviet Union a lot of high ranked communist party members turned into new liberal capitalists overnight. People tell us that the Mercedes-600 and the Audi-8 series are built only for three cities; Moscow, St.-Petersburg and Kiev. 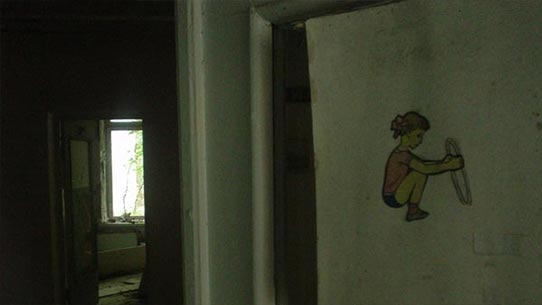 Prypyat is a typical Soviet town, captured in a time-capsule. The last few years a lot of houses have been vandalized by looters, mostly looking for metal.
A scientist proposed to put Prypyat on the Unesco-list of cultural heritage. But the government can’t stand the idea that Chernobyl would be recognized as one of Ukraine's main places of value. 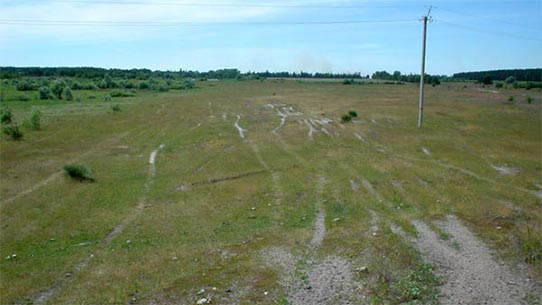 Question to a old farmer.
-Have you ever visited other countries than the Ukraine?
He took some time to think and answered: Austria, Hungary, Poland, the Soviet Union and Germany.
-How could you do so much traveling?
I have not travelled to all of these countries. They came to me. 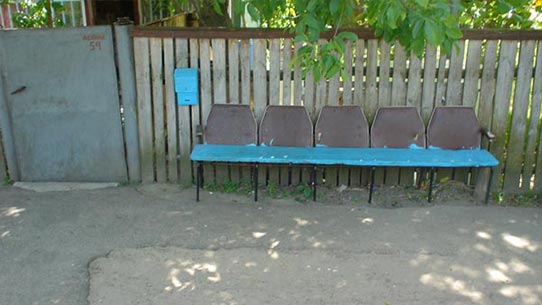 A small village, three hours driving from Chernobyl. An old lady comes out to greet us. Now retired, she has worked as a milkmaid at the local Kolchoz for over 25 years. She disappears for a moment, then comes back carrying an enormous plate with strawberries. Are we filming here because of the radiation maybe? We ask her if she is afraid. Not for myself, she says, but I have four grandchildren. Then after some silence she apologizes; if I’d known that you were coming I would have boiled some potatoes for you. 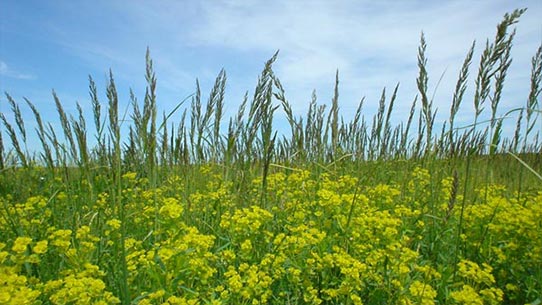 A lot of fields in the countryside are abundantly covered with wild flowers. Most of the land is no longer in use since privatization of state farms. A local collective we saw nowadays only keeps 180 cows, instead of the few thousand they once had. 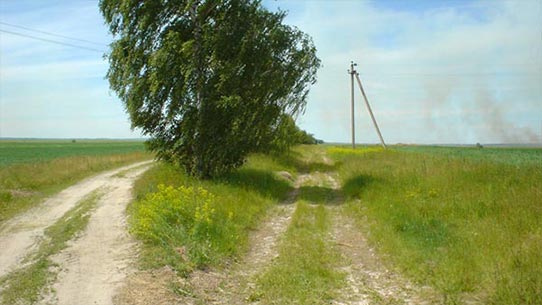 With an iron fist we will chase the people into their happiness.
In Stalin-days watchtowers were guarding the fields to prevent theft of grain and corn. 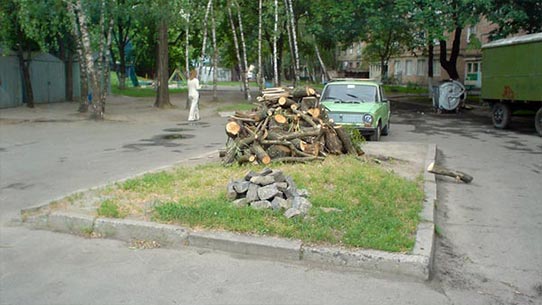 A few kilometers away from the covered Chernobyl plant you will find the ‘red forest’ (red because of the trees’ needle-color). Parts of the forest were so heavily contaminated that they had to be cut down by the liquidators and buried under a thick layer of sand. Last night I dreamt of trees glowing red with radiation. 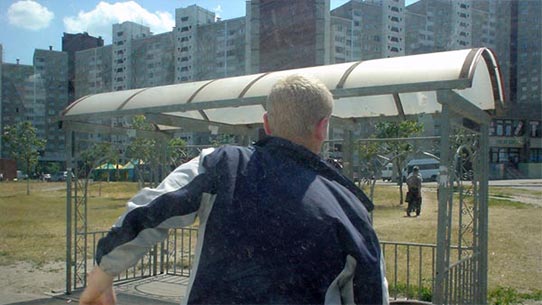 The mayor of Kiev is a great fan of improving his towns infrastructure. Everywhere you can find building sites for posh neo-romantic architecture, and new gates and statues in ancient style. In a fast pace he is trying to turn Kiev into some kind of little Paris. For the city council it is not a problem that the mayor is also the owner of eight of the biggest construction companies around.

The angel with golden wings, looking high over Kiev's main square, has a distinctive resemblance with the mayors wife. 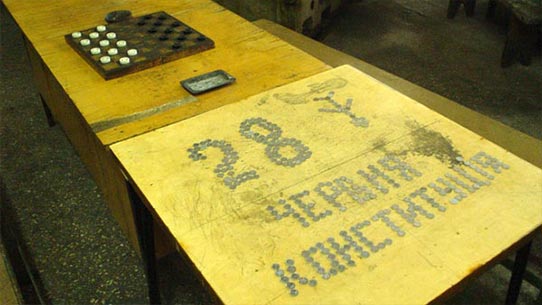 This factory is producing electrodes for welding but also trades everything they can get their hands on. Most of the workers are send home since business has dropped, the managers are having fights about how to lead the factory, the government is investigating possible tax fraud.
In Ukraine you get a small (the official) part of your salary in Ukraine currency, the rest you get in dollars. But it’s quite common workers are not paid for months. Sometimes people only get paid in factory products. You must find your own way of selling them. 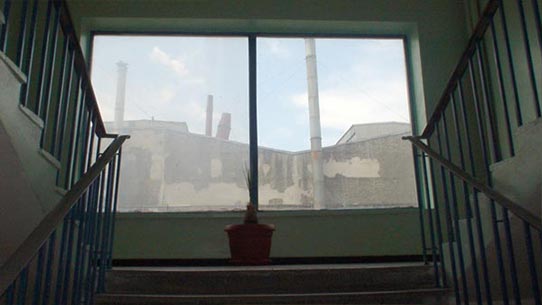 When we enter the factories financial-office the ladies working there immediately offer us vodka and champaign. After some time they introduce us to a single and “very talented” girl from another office down the hall.
The women practically the only working force still in business, but they go from one smoking break to another, about every twenty minutes. In the hall they sit on dusty steel money-vaults, protecting their clothes with pieces of print-paper. They gossip and drink their instant coffee in big mugs, decorated with 100$ notes. 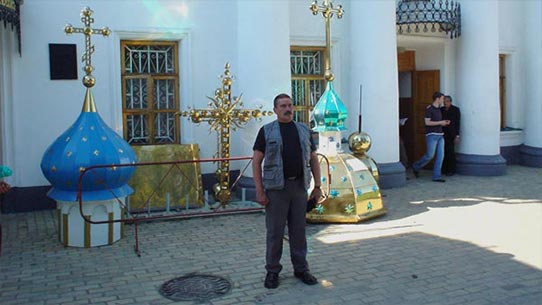 The local orthodox monastery has set up an enterprise, selling authentic but newly build golden domes to decorate your house with. You can also take a picture with them of course. 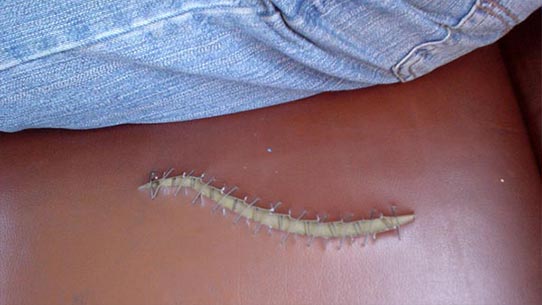 On all skai-leather seats in our 2nd class couch big yellow squares were painted. Quickly arranged in a masked grid, the decoration was put there to prevent people from stealing the ‘precious’ bench material. 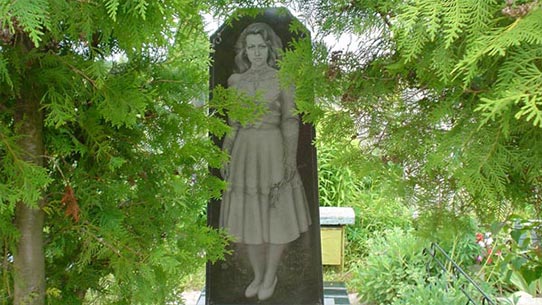 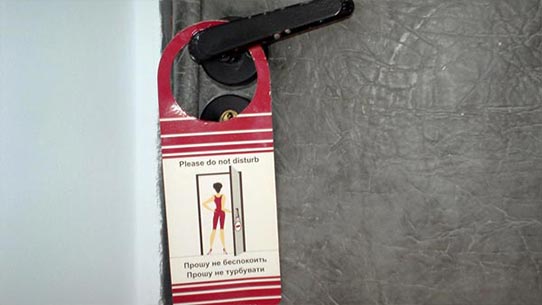 Do you want girls. After three anonymous phone-calls to our hotel-room, the picture on the do-not-disturb-sign got a new meaning to us.

Our friend, a successful lawyer around here, tells us that he loves Amsterdam, “because, it is freedom!” He found two beautiful girlfriends out there that cost him 50$ to do a pole-dance to his favorite Metallica-song “Sad but true”. They turned out to be Ukrainian. 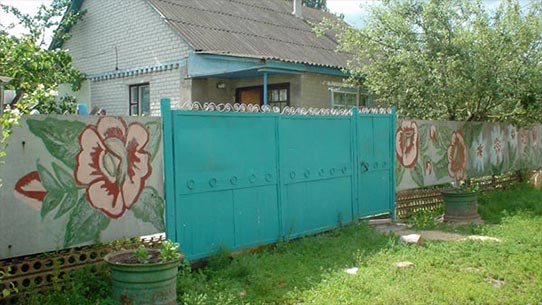 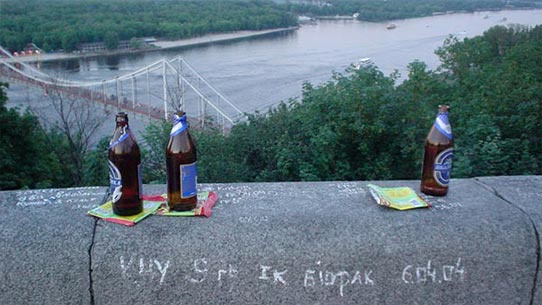 “We hate the Russians. We don’t drink vodka, like Russians; we drink beer,” says my Ukrainian friend.
-“You both get drunk,” I argue, and snap my finger against my throat (the gesture here to indicate that someone is waisted).
“Drinking beer is probably one of the biggest national traditions. It’s our identity. Russians drink vodka, and we hate Russians,” he says.
-“Then how can you be married to a Russian girl? You seem to love her very much, don’t you?”
“Yes. This is (a) normal situation..” 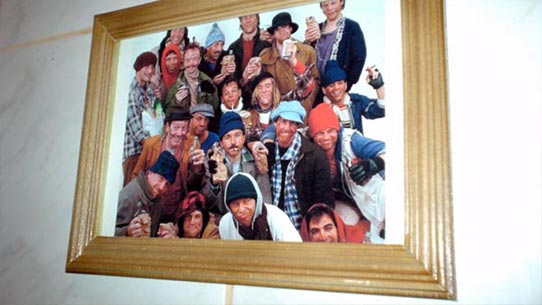 A photo in the toilets of a not so cheap Italian-style restaurant. Kiev's new rich depicting themselves as bums and scum. Some universal kind of role-play.