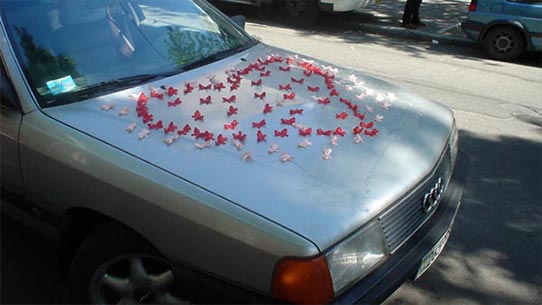 Wedding in the streets of Kiev. Red on metal #01 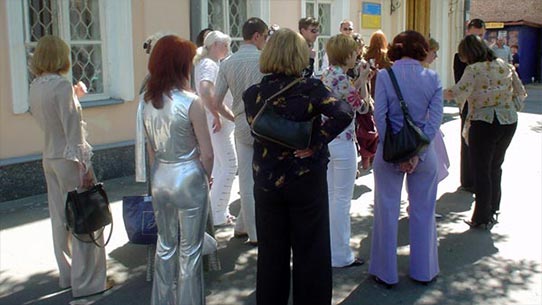 Wedding in the streets of Kiev. Red on metal #02 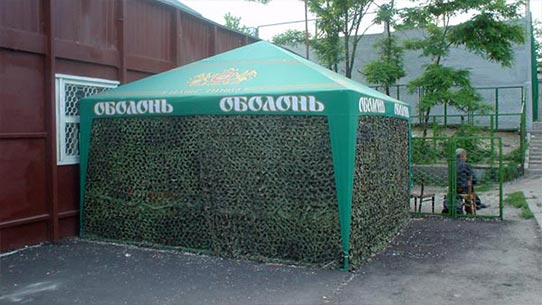 Selling food just out of the back of the van. 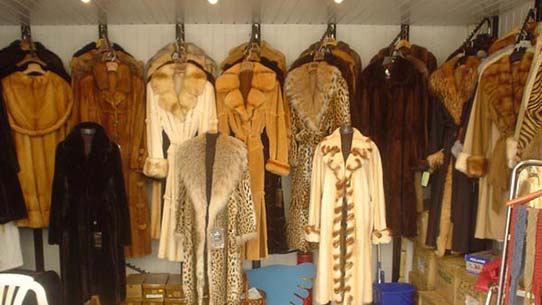 During the communist regime the market was only for the rich and priviliged. Now prices have dropped to a level that most people can afford.

Supermarkets sells everything you need. Although we only buy some basics (breakfast etc) there, each time we seem to leave with extraordinary large bags compared to the other customners. 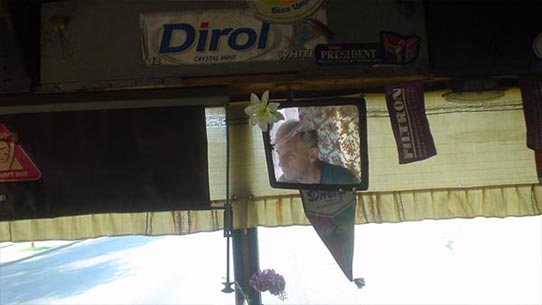 One day we were standing in front of the bus. A boy next to me in a Barcelona t-shirt, gave me a 50 kopecks-coin (€0,08). When I kindly refused it someone else in front of me took it, gave it to the driver, bought a ticket, and returned it to the boy. I followed the ticket go from hand to hand to the back of the bus, until couldn’t see it anymore. 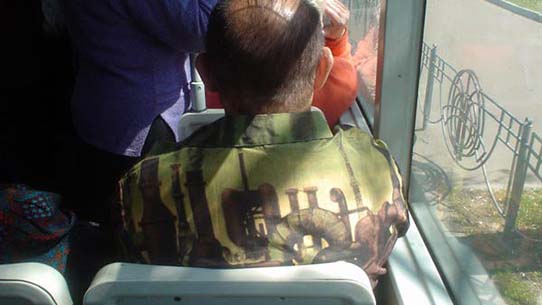 Chimneys in print on a shirt, typicall workingclass clothes 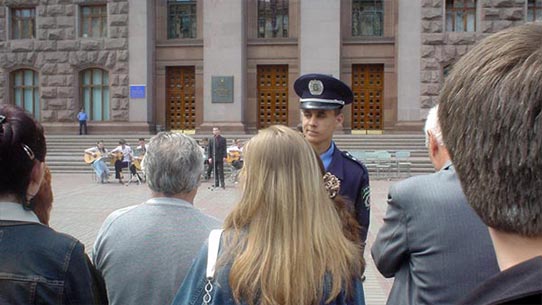 The police is (still) public enemy number one. Our friends tells us:
For example you are somewhere, and they ask for your ticket. When you show it they take it and say; where’s your ticket? Everybody is allowed to get drunk. But not too drunk. They will stop you and decide if you are too drunk or not. You have two choices; either go to prison or pay them. 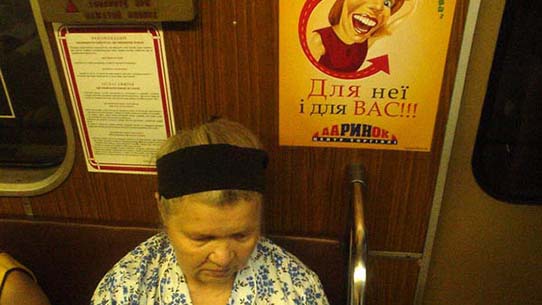 Any time of day, the trolleys, busses and metro’s in Kiev are fully packed. It makes you wonder where everyone is going all the time. The roads are very wide (right now we are living next to an eight-lane ‘prospekty’) but there’s no way they could handle the traffic if everyone had their own car.

Our friend: I have not taken the trolleybus in five years. I hate places with a lot of people, all making noise. It makes me I loose my focus. 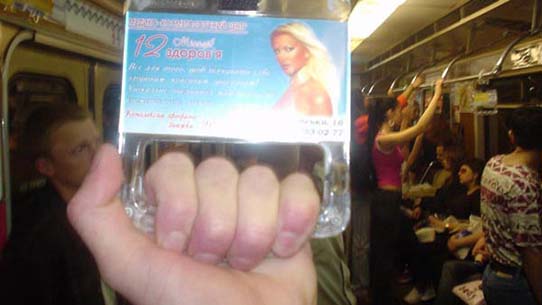 When I’m in another country I’m always interested in local television-shows. Since we Icannot understand a word they say here, I’ll just go after the images. Everything foreign is dubbed. An awful lot of commercials, the usual bombastics. This years winner of the Eurovision Song-contest, Ukrainian Ruslana, has a lot of equally extravagant fellow-popstars. Botox, silicons, wigs; everyone as sensual as they can be.
In the street the girls dress tight and go around like Lolita-mannequins. High heels for all of them, we will do a fashion-report soon. 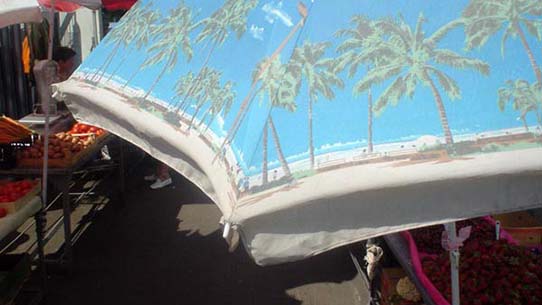 Outside a karaoke bar the unstable voice of a young man, shouting-singing: We are going to Odessa. We will have a lot of fun. 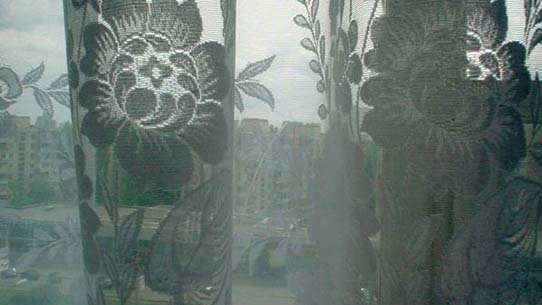 Everywhere you will find old lady’s selling all kinds of things; strawberries, sunflowerpits, cherries, ballpoints, panties, sigarettes, shower-hats. But far most of them sell flowers, in the strongest possible colours. In winter the flowers come from Holland.

The babushka’s still work everyday. Their pensions and life savings have become worthless by the 10.000% inflation that hit the Ukraine after its independence. The market-economy of the new Ukraine doesn’t seem to have a social plan for them. 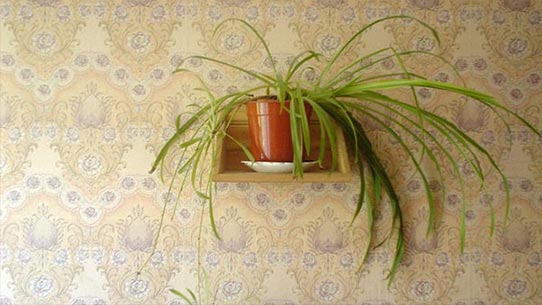 Staring at the flowers in the wallpaper. The second day we suddenly saw teddybears in the pattern, and didn’t manage to loose that image. A room filled with teddybears can make you crazy, so after a while we had to move 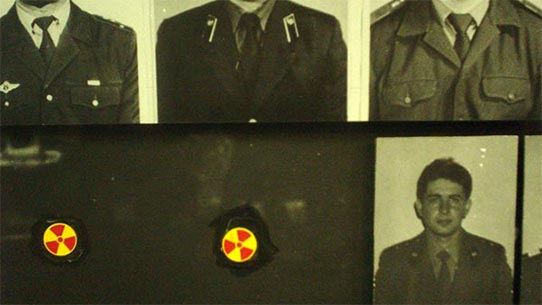 Why do you want to go to Chernobyl? You see this (pointing at his empty beer-bottle); this is Chernobyl. It’s nothing!

We ask Sacha about the Chernobyl disaster, one of the reasons we are here.. The government told the people nothing about the accident. But after some time the city was buzzing with rumors. Nobody knew what was going on, or how bad the situation was. When it was noticed that children of high placed people where carrying little bottles of jodium with them and eventually stayed away from school, Sacha knew things where wrong. He sent his wife and children to Odessa, but was forced to stay in Kiev because of his job. With some friends of the university he built some home made radiation-detectors. For that summer Kiev was a place with only man. Drinking and watching the 1986 football-tournament. 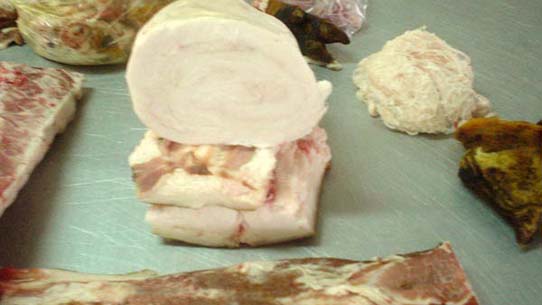 Lard before Wodka is the necessary ingredient to survive the nights. Well, not only nights.