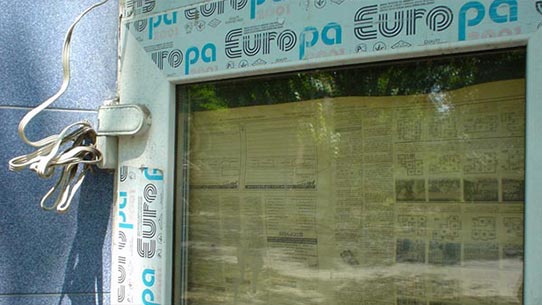 Since Poland became the outer border of the expanded European community the Ukraine has become our nearest neighbor. Most people we meet are obsessed by the idea of being ‘European’. As a result of that we we’re called to account for the many immigrants we have in the Netherlands. Immigrants here off course meaning people from Surinam, Northern Africa and Turkey,

“You have big problems with the immigrants”
“But why don’t you take Ukrainians?”
“We are European too” 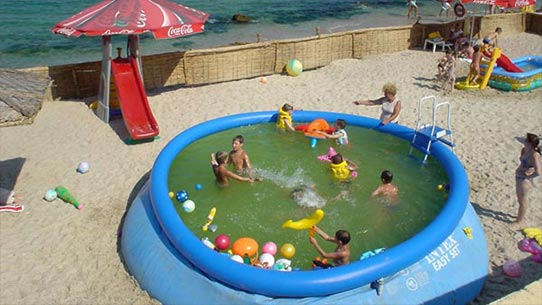 ODESSA / at the pay-beach. Condom filled with children.

In Soviet days the Black Sea was the place to be. Odessa is still dotted with numerous dacha’s and sanatoria. Summer camps build for every group in society. There where special dacha’s for factory workers, artists, doctors, athletes and the KGB agents. When you book a room the massage and psychological therapy might be already included.
Although most of the places lost some of there grandeur they are still very popular and mostly visited by Ukrainian middle class. (Rich people go to the West and poor people can’t afford holydays) But to be honest, it’s great out here. Odessa has not been spoiled by too much by mass tourism. Except for the hundreds of casinos out here. But they are not for tourists. They are for laundering money. 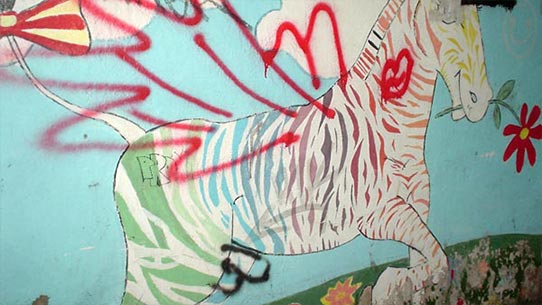 Some guys turned the wall painting in an exquisite piece of art by adding some poetic elements.

You are coming from Holland?
Do you have some weed?
You don’t smoke?
That’s impossible.

Meanwhile in the summer camp a lonely karaoke singer passionately sings a song without any audience. Some young guys look bored to death while waiting for the barbecue to start. Two girls in a dark corner are smoking a cigarette. Obviously in secret. 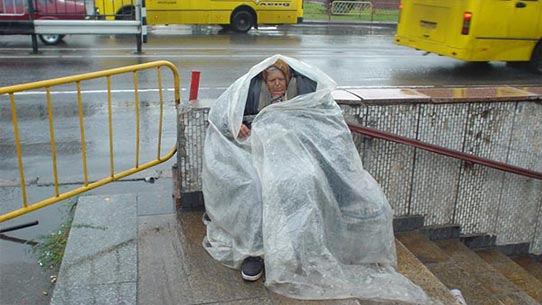 Stairs 1 / Trying to sleep in the rain

The pedestrian tunnels underneath the squares and ‘prospekty’ are guarded by grim-looking civil servants. As a result of this, this, for some it’s not allowed to go downstairs and take shelter there.

Of course Odessa is home of one of the most famous stairs in the world. The Potempkim stairs as depicted in Eisensteins groundbreaking movie Battleship Potemkim is a popular spot to make a picture. Instead of the most important stairs in film and Ukrainian history most tourists immediately point the camera at the opposite sea terminal for luxurious cruise ships to shoot their family portrait. 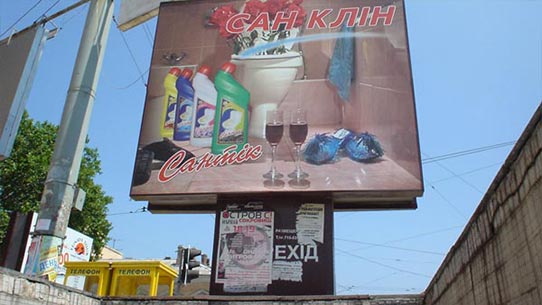 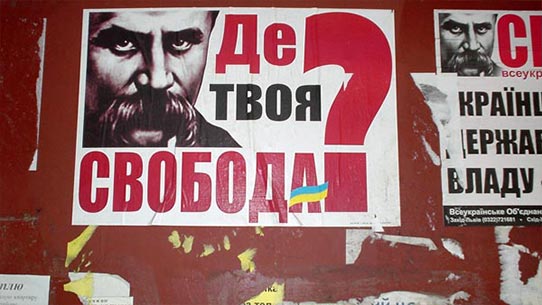 “Now where is that freedom?” (advert for a political party)

Recognize the guy with the moustache? I had to be convinced it is really him, because I couldn’t believe it. After all mister Joseph Vissarionovich Djugashvili only killed 3-6 million Ukrainians. Imagine the state of a country where parties like his can appeal to the good old days. 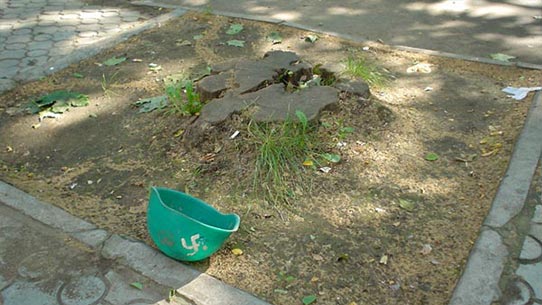 ODESSA / history at our doorstep

When the Germans invaded Russia in WW II, many Ukrainians initially saw them as heroes and liberators. Having been systematically persecuted by Stalin, they soon found out that the Germans were no better. A big tactical mistake by the Germans. 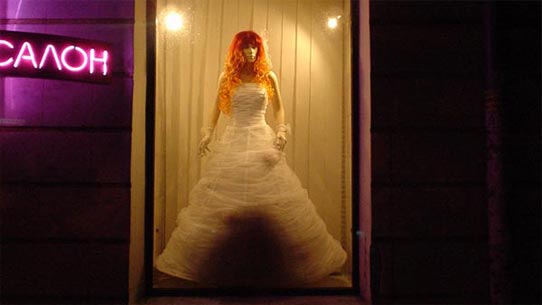 Greece has just become Champion of Europe. Like I didn’t already feel a bit far away from reality. 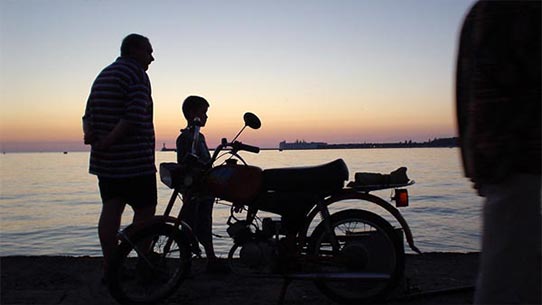 Our friend doesn’t like to swim in the sea, nor does he like the sun. He was sent to his grandparents in Crimea in the aftermath of the Chernobyl disaster. By that time he was six year old. He stayed there for over a year, and by the time he got back he spoke fluent Ukrainian. 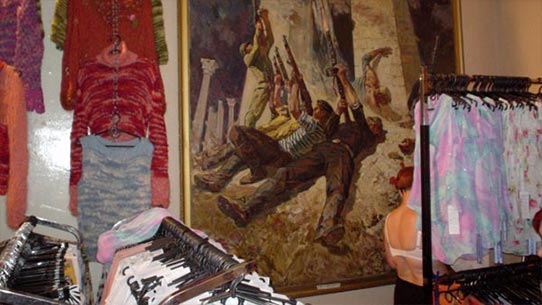 In order to get a train-ticket back to Kiev we tried the counter with the sign ‘Information’. The lady didn’t speak a word of English though, except for the word ‘no’. In search of some tourist-information, a travel agency or whatever, we ended up in a sort of government-style building, which had been transformed into a clothes market. The gruesome WWII-paintings on the wall were not for sale. 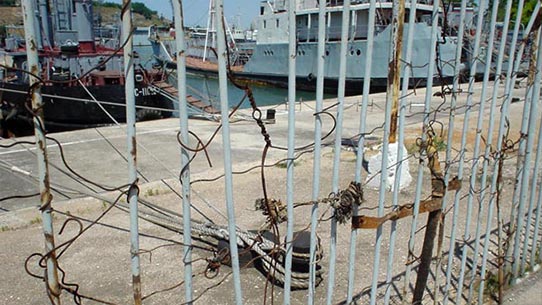 In Soviet days Sevastopol was a closed city. The presence of the Black Sea fleet only allowed (mostly Russian) navy personnel to live there. Unlike the rest of Crimea, which was the region to spend the summer for the privileged civilians.

In the negotiations on Ukraine’s independency Jeltsin gave Crimea to the Ukraine, but the question of the fleet remained unsolved for some longer. In the end the Russians took all ships they could use and left the rest, including a lot of former personnel, who are now out of work. Right now the Ukrainian Navy has just one small ship in an operational state these days and a big pile of ships ready for scrape heat. The state of the harbor is dreadful, and the security not quit up to date.

After the declared independence of the Ukraine Crimea and a big part of eastern Ukraine wanted to stay part of Russia. A lot of political analysts feared civil war or an Russian intervention. They speculate Russians involvement in the war in Tetsjenia saved the Ukraine from a Russian intervention. A lot of Russian flags are still in top in Sevastopol; an open provocation to the central government in Kiev. 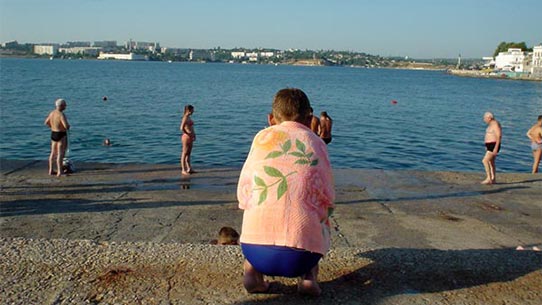 Once the docking place for the powerful and feared Black Sea Battleships, the massive concrete qua is now used by sunbathers.

The hot sun burned our skin. A big school of jellyfish did the same. That night a group of elderly spontaneous sang a heroic song. It sounded like a cool evening breathe, and for a moment we forgot about our red leather skins 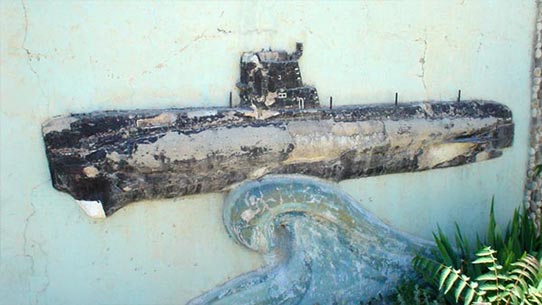 “Diving in an underwater James Bond like submarine base”, says an add in the Balaclava diving shop.

In Balaclava the Soviets build a base for nuclear submarines. Contractors who built the Moscow Metro had to drill a long canal trough a big peace of rock. The tour guide proudly states that base was never detected by Nato-satellites. This place was top-secret and smartly camouflaged within a small shipyard near a stonecutting factory. At the same time nothing is James Bond like. It looks small, quit easy to gain acces to. Even the thick doors to withstand a nuclear blast look quit small to me. Strange red human hairs are attached to small sensors on the sealing. I imagine someone having to work here every day. It does not feel like something special. In places like this you feel how things you hardly know about can turn into things of mythical proportions. Maybe a bit like Sadam having weapons of mass destruction. 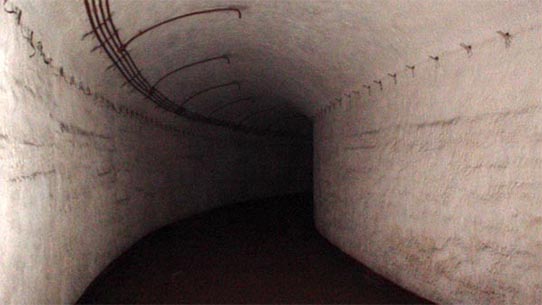 It made me think.

What will the future hold for all the Ukrainian generous people we met and learned to love in this fascinating country. The Ukraine wants to join up with Europe, but as long as the human rights situation, government corruption, and economy does not improve they don’t have a change.

A (Russian) friend told us: “Within the Soviet Union we had a bad time and there where a lot of problems. But at the same time we had the feeling we where suffering to get a better future. Working for the good off society. There also were things to be proud about. Now we lost our focus, the democracy is actually a façade. People live only for their own personal well-being and are only interested in the food on their own plate, there is no hope for a better future anymore”
-“Why do the people accept this,” I asked?
“There are still people who want to make a change but most of the people are tired of fighting” 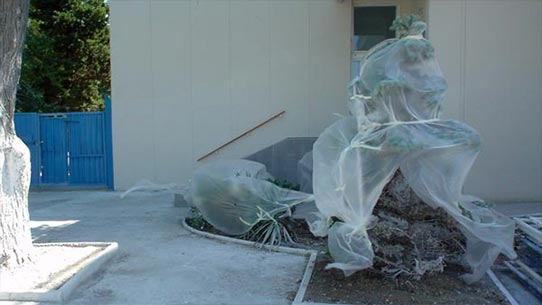 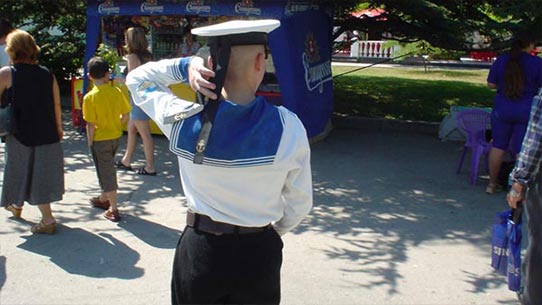 This young sailor was showing his father the town in his fresh uniform. When we walked passed a small office near the harbor a guy started yelling at us. We thought we where entering a restricted area but then he pointed at some pictures and it made it clear he wanted to sell us some navy parafernalia for souvenirs.